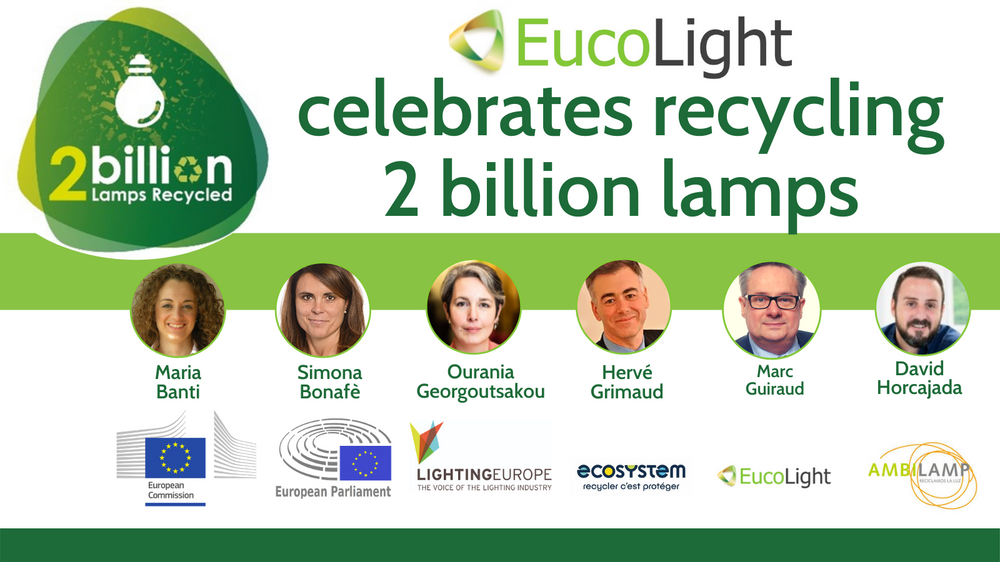 Brussels, 11 February 2021. ,EucoLight, the European Association of collection and recycling organisations for Waste Electrical and Electronic Equipment (WEEE) lamps and lighting, has celebrated the recycling of two the billionth lamp across Europe.

Brussels, 11 February 2021. ,EucoLight, the European Association of collection and recycling organisations for Waste Electrical and Electronic Equipment (WEEE) lamps and lighting, has celebrated the recycling of two billion lamps across Europe.

During the celebratory online event, which brought together representatives of the main companies and institutions dedicated to lamp producing and recycling, it was highlighted the importance of this achievement from a recycling and environmental point of view.

Ms Simona Bonafè, Member of the European Parliament, was in charge of disposing the lamp number Two Billion in the recycling container. During her speech, she pointed out that:

“we have no alternative to acting and moving from a linear model aiming and maintaining the value of products, materials and resources for as long as possible”.

In addition, Hervé Grimaud, Chairman of EucoLight and Deputy Managing Director of Ecosystem (France), stated that

“EucoLight members’ mission to collect and recycle efficiently as many lamps as possible in an environmental sound way has been clearly achieved”.

Ourania Georgoutsakou, Secretary General of LightingEurope, highlighted the commitment of the European lighting industry to waste recovery and showed the path forward with regards of sustainability of lighting products and remarked about online sales and EPR compliance:

“What’s illegal offline should be illegal online. Our obligations towards the planet do not stop when we sell or buy online”.

Maria Banti, Policy Officer at the Directorate General for Environment at the European Commission, thanked the producers in the lighting sector for the results achieved, highlighted the importance for Producer Responsibility Organisations (PROs), like EucoLight members, to have sufficient operational means to meet their obligations:

“PROs have a vital role in the achievements of the WEEE directive”.

What does it mean to recycle two billion lamps?

The recycling of two billion lamps has great implications in terms of environment and Circular Economy. If we adapt the figures to easily imaginable equivalents, we could determine that two billion lamps are equivalent in weight to 140 times the London Eye and all the recycled lamps in a row could circle the Earth five times.

All this data has been captured in a video that has been played during the celebration event and is now available on EucoLight website.

A recycling milestone thanks to public awareness in Europe

According to data from the latest EucoLight study – carried out at the beginning of 2020 – commissioned to GfK Italy on citizens’ perceptions and behaviours regarding the treatment of waste lighting and other household appliances, between 62% and 88% correctly identified the right place to dispose of waste electronic and electrical equipment (WEEE). These data corroborate the consolidation that the majority of European citizens are aware of the need to recycle lamps and WEEE waste. However, based on these data, there is still some room for improvement and for these figures to continue growing year after year.

EucoLight is The European association of collection and recycling organisations for WEEE lamps and lighting. On behalf of its members, EucoLight engages with everything related to the WEEE Directive, legislations and standards affecting the collection and recycling of WEEE lighting. Its members collect and recycle, in aggregate,80% of the lamp waste collected in the 19 countries in which they operate. EucoLight is the voice of European WEEE compliance schemes specialised in managing the collection and recycling of WEEE lighting; working to make the circular economy a reality for lighting products. EucoLight has 19 PRO members: AMBILAMP (Spain); Appliances Recycling SA (Greece); Ecolamp (Italy); Ecosystem (France); Ekogaisma (Estonia); Ekolamp s.r.o. (Czech Republic); Ekolamp Slovakia, Ekosij ZEOS (Slovenia); Electrão (Portugal); Electro-Coord (Hungary); ElektroEko (Poland); FLIP (Finland); Lightcycle (Germany); LightRec (Netherlands); LWF (Denmark); Recolamp (Romania); Recolight (UK); Recupel (Belgium); UFH (Austria) and one affiliate member, LightingEurope. Founded mid-2015, EucoLight has quickly embarked into constructive dialogue with relevant stakeholders to provide expertise in the field of management and treatment of WEEE lighting and to promote the positive role of Extended Producer Responsibility schemes on the environment and society.

LightingEurope is the voice of the lighting industry, based in Brussels and representing 30 companies and national associations. Together these members account for over 1,000 European companies, a majority of which are small or medium-sized. They represent a total European workforce of over 100,000 people and an annual turnover exceeding 20 billion euro. LightingEurope is committed to promoting efficient lighting that benefits human comfort, safety and well-being, and the environment. LightingEurope advocates a positive business and regulatory environment to foster fair competition and growth for the European lighting industry. More information is available at www.lightingeurope.org.